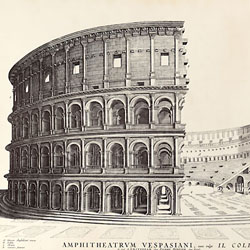 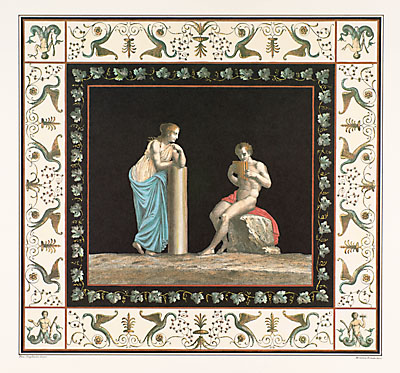 Engraved by Marco Caloni, after the drawings of Franz Smugliewicz (1745-1807). The engravings are from 'Vestigia delle Terme di Tito' depicting the wonderful frescoes on the walls of the palace of the Domus Aureus (the golden house), the sumptuous imperial complex in Rome. It was originally erected by Nero in 64 ad after the great fire which destroyed Rome, and was lavishly decorated with fantastic late-Hellenistic murals. Before the golden house was finished, Nero died, and Titus, and subsequently Trajan, built thermal baths over the ruins. The Baths were a social centre in Roman life, where people not only went to bathe, but to use the wonderful libraries, lecture halls, museums and gardens which were all incorporated in the Baths. The preserved remnants of the golden palace lay untouched beneath the buildings until excavation started in 1480. The underground corridors and rooms were known as "le grotte" or cave. The original frescoes which survived, and their ancient decorative style (called "grotteschi") became very influential in the renaissance and inspired artists such as Michaelangelo and Raphael. These beautiful prints by Carloni of the murals of the Domus Aureus show us the characteristic decorative borders filled with fantastic and imaginative plants and animals. The ornamental borders decorate the central mythological, religious, or historical subjects of the murals.